Super Climbs Back Up 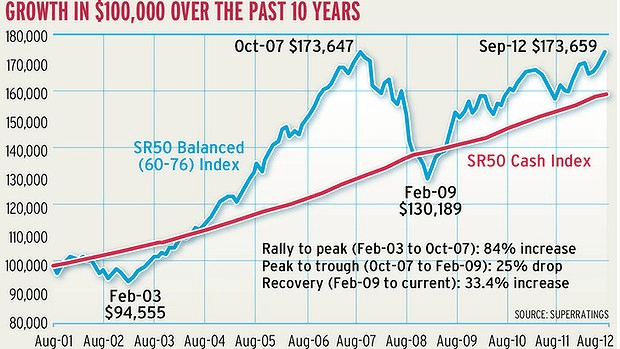 Finally, contributors are back to the balances they held before the  global financial crisis.


It has been a long return, but superannuation funds have finally clawed back  their post-GFC losses thanks to strong gains in equities. That means someone  with $100,000 in a median balanced fund before the crash in 2007 is back to  where they were (see graph).

But what a painful journey it has been, particularly for older fund members.  The latest SuperRatings data shows the median balanced fund - where most people  have their retirement savings  - delivered 10 per cent over the 12 months to  September 31, or 6.3 per cent a year for the past 10 years.

The SuperRatings research manager, Kirby Rappell, attributes the double-digit  returns to a strong performance on Australian and international  sharemarkets.


Overall, balanced funds are on target to achieve their long-term objective,  earning 6.5 per cent a year for the past 20 years.


''If you look back to 1992, when mandatory super was introduced, super has  delivered on its long-term promise of the inflation rate plus 3.5 per cent,''  Rappell says.

So should consumers feel better?

David Knox, a senior partner at Mercer and author of the report, says the  score is based on the best weighting for a pension system across all age groups,  including pensioners.

A sharemarket crash prior to retirement can be devastating.

Knox says taking a life-cycle approach to super is best for most people.  Asset allocations vary with age. As members age, growth assets are reduced and  safer assets (bonds and fixed interest) increased.

''Someone rolling over their super at 65 and planning to live off their  allocated pension for the next 20 years might reduce their exposure to growth  assets to 50 per cent,'' he says. ''At over 70, it might be appropriate to drop  that to 30 per cent growth.''

Over the past 20 years, super funds have changed from defined-benefit schemes  to defined-contribution schemes, shifting risk from the employer to the  employee. Knox says until the early 1990s only a third of people had super.  ''The introduction of mandatory super in 1992 changed all that. Everyone gets at  least 9 per cent across the whole workforce,'' he says.

But that shift means being ''disengaged'' is not an option. In the aftermath  of the GFC, members discovered that investment labels meant little. ''Balanced''  funds lost a third of their value because of a heavy exposure to equities;  ''capital stable'' options went into the red; and ''cash'' made losses.

Call YourShare to find out how you can make the most of your super by claiming back the fees and commissions you pay each year! Visit www.yourshare.com.au or call 1300 554 774